American Birkebeiner ... Google and Me!

Last Sunday I read the NY Times interview with Marissa Mayer. Given my professional focuses are web 2.0 and collaboration software tools for the enterprise, I found it neat that Ms. Mayer and I had something in common ... she wanted to ski America's longest and most difficult ski marathon ... the American Birkebeiner. Actually, the NY Times got it wrong, she had just completed her first Birkie 7 days earlier (I suspect the interview occurred before the race, but the publication came after). I also had just completed my first Birkie ... in fact Marissa and I were in the same starting wave ... number 8 for first time Birkie skiers.

My only comment is ... way to go Marissa! Fantastic! Well done! Now, before you think I am just heaping praise on a senior Google executive, let me put her achievement in perspective.

In other words, when one works in the San Francisco area, there NEVER is the opportunity to get out and ski after work. The total days of snow on the ground in Silicon Valley this Winter ... ZERO! By contrast, although I have a demanding software job, a local park keeps 7.5k of trails lit at night till 10 pm. Any day after work I could head over and ski 15 to 20k for a hard workout.

Thus, I admire Marissa Mayer for her personal courage that allowed her to finish. The official Birkie records show she was out on the trail for over 8 hours. The hills on the Birkie course never stop; I know from my own pain that it would have been easier to quit. Congratulations Marissa. Oh yeah ... 54k equals 33 and 1/2 miles, which is a long distance anyway you cut it!

Learn about my own Birkie impressions from my prior post including how "I cooked my cast"! Finally, here are two photos ... one of me resting a few minutes after completing the Birkie, and one of Marissa out on the trail. Click to expand either image to full size. 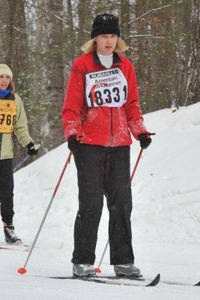 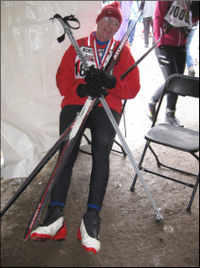 Posted at 06:09 AM in Northern Life | Permalink

The comments to this entry are closed.